The easiest way to think of blockchain is as a new type of database which can't be corrupted or compromised. The blockchain itself is distributed across a number of different hosts (similar to how bit torrents and other forms of peer-to-peer sharing work), which means that even if one version of the ledger is corrupted or compromised, the other instances will remain unaffected. As you can probably imagine, this makes it a highly versatile technology that has applications across a wide range of industries.

One of blockchain's most promising applications is the field of smart contracts. That's because as an interoperable and incorruptible system, it can add an extra layer of openness and security. It can raise people's confidence and pave the way towards a fairer system. Let's take a look at how that might work.

What is a smart contract?

One of the biggest benefits of blockchain is that it can act as a decentralized system that cuts out the middlemen. Smart contracts are being touted as something that one day could replace lawyers. The idea is to use computerized contracts which are stored within the blockchain and which can be automatically activated if certain conditions are met.

Smart contracts can be stored securely and accessed by all parties through a decentralized system. Any attempts to change the contract could be rejected and all stakeholders will be automatically informed. They're easy to use once the infrastructure is in place and effectively functions as automated lawyers. In the past, you'd need to pay a lawyer to prepare and authenticate the document. With smart contracts, you simply pay a small fee and immediately receive the documentation.

Because of this, smart contracts are generally faster and more convenient, which is why it's more and more common to find people tapping into the blockchain to streamline their workflows. It can offer the perfect mixture of security and ease of use whenever you're exchanging anything of monetary value, from money to property and shares. Better still, there's no need to pay a cut to a middleman.

One of the most common use cases for smart contracts is logistics and supply chain management. If your company is manufacturing, shipping and then selling goods, the supply chain can grow so complicated that it's less like a chain and more like a web. A blockchain-based system could standardise the data and reduce the amount of human intervention that's required, and you could pass those savings on to customers by undercutting competitors.

For example, instead of using a bunch of systems, smart contracts could be set up to cover the acquisition of raw materials and to automatically track products from the time that they're made to the time that they're packaged and shipped. If there are any problems along the way, the company can check the record on the blockchain to identify bottlenecks or to track down lost products.The result is a more streamlined and more transparent system that has a variety of business uses, and not just when it comes to supply chain management.

The air transport industry is carrying out research into blockchain's potential to store flight data and to use smart contracts to judge potentially conflicting data. The goal is to use blockchain and the smart analysis of data to make flying safer.

Five global banks are already building proof-of-concept systems using a trade finance and supply chain platform that uses smart contracts. Moreover, the banking industry is ripe for disruption and cryptocurrencies themselves have already had a big impact.

Smart contracts are being used at the state level, too. For example, Delaware has announced plans to use smart contracts to streamline back office procedures and for “distributed ledger shares”.

Smart contracts are also being used for insurance policies, and there's a reason for that. At the moment, the claims process can take months and leave people with a shortfall while they're waiting to receive reimbursement. At the same time, insurance companies are constantly fighting fraud and false claims. Smart contracts could speed up the process while cutting fraud, which is good news for everyone.

Ultimately, the only limit when it comes to the potential uses of blockchain is human ingenuity. When you stop thinking about the current state of the technology and approach it from a more abstract point of view, you start to see just how many potential applications it has. The industries we covered above are just some of the early adopters. We can't wait to see what happens when blockchain becomes mainstream.

So far, we've focused mostly on the positives, and that's because they outweigh the negatives. Still, no technology is perfect. Smart contracts do have their downsides, and while most of them can be avoided if you plan ahead, you still need to be aware of them if you don't want to get burned.

The first way to protect yourself is to make sure that your developers know what they're doing.

For our technologically advanced readers we offer to check several posts on Medium to get a better understanding of how blockchain works on its backend and to see what a minefield blockchain development can be from the technical point of view.

For business gurus, it's good to sum up the most obvious vulnerabilities of smart contracts as the fact that they can occasionally be exploited by hackers. Imagine spending your retirement funds on ethereum and losing the whole lot. Now imagine that you didn't lose it until it rose to 10x value and was taken away just as you were about to cash out through a smart contract vulnerability. This might sound like a horror story, but it's a real risk that you can avoid by working with a professional.

The dark side of smart contracts

Thijs Maas, law student and founder of LawAndBlockchain.eu, opened up about the real issues of smart contracts in an article for Hackernoon. He explained:

“Last year, the DAO, a decentralized ‘autonomous' investment fund, got hacked for $50 million. In July, a hacker was able to steal $31million of Ether by exploiting a bug found in Parity's wallets. Today, we have the worst hack yet, only this time, the stakes are even bigger and it is all just one big f*ck up.”

Maas was referring to a mistake made by a user, who'd flagged an issue with Parity, a company that offers smart contracts for users of the Ethereum blockchain. The developer figured out that there was a vulnerability that allowed him to become the “owner” of the contract, which he subsequently exploited to “kill” it. To be fair to him, he didn't really understand what he was doing. But ultimately, the effect was that up to $300 million worth of Ethereum was effectively deleted. Gone. Kaput.

The problem is that smart contracts are only as good as the developers who create them. And for a developer to create smart contracts that stand the test of time, they need to understand exactly how the smart contracts fit in with the rest of the business. They also need to put security front and centre and actively take steps to break their own systems to hunt for bugs and vulnerabilities. Parity was founded by Ethereum co-founder Gavin Wood and so you'd expect a certain amount of quality. If even Parity has weaknesses, imagine what will happen if you hire a sub-par developer.

Getting started with smart contracts will always involve a certain amount of risk, but so does any business decision. That's why you need to weigh up the pros and cons of smart contracts before you go ahead and make the switch.

After all, if you've learned anything from this article it should be that blockchain-based smart contracts can offer a huge amount of value, but they can also expose you to a certain amount of risk. That's why it's so important to make sure that you're working with a professional. And once you dive into blockchain development, it's vital to have an experienced team on board to make sure all vulnerabilities are ironed out easily before you lose money.

One way to increase the likelihood of quality is to look at testimonials and case studies that show the developer's previous experience when it comes to smart contracts and blockchain development. It can also be worth considering using a private blockchain so that you have more control over the data and there's less opportunity for exploitation. It's all about maximising the value you get from smart contracts whilst simultaneously reducing the potential for abuse.

Looking for a reputable partner to work with you on smart contracts and blockchain development? You've come to the right place.

Here at Zfort Group, we've been working with blockchain as a technology on a number of projects already. We love to be pioneers in this field and we'd love to schedule a chat with you to tell you more on how blockchain can be used on your project. Click here to get started. 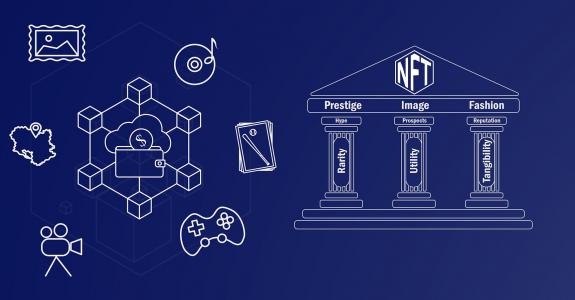 Why Are NFTs So Valuable?