Over half the world's population is already connected to the net, and while that growth might be slowing, it's still very much on the rise.

At the same time, tech startups are continuing to make their services available at lower and lower prices, with many of them adopting free or freemium models that don't cost users a thing. But these models typically require the storage and use of large amounts of data, and that in turn means that data protection is more of a hot topic than ever before.

Just take a look at Europe's General Data Protection Regulations (GDPR) to see how data and the way it's stored is under scrutiny. The result is a landscape in which there's a “them versus us” mentality where tech companies and legislators see each other as enemies instead of working together towards a common goal. After all, it's in a company's best interests to keep its users (and their data) safe.

It's a constantly changing landscape, and that makes it difficult for people to stay on top of it. With that in mind, we've decided to share some of the current top trends that are shaping the development of the Internet based on a recent research by Mary Meeker 2018 Internet Trends. Let's go.

Growth is set to slow 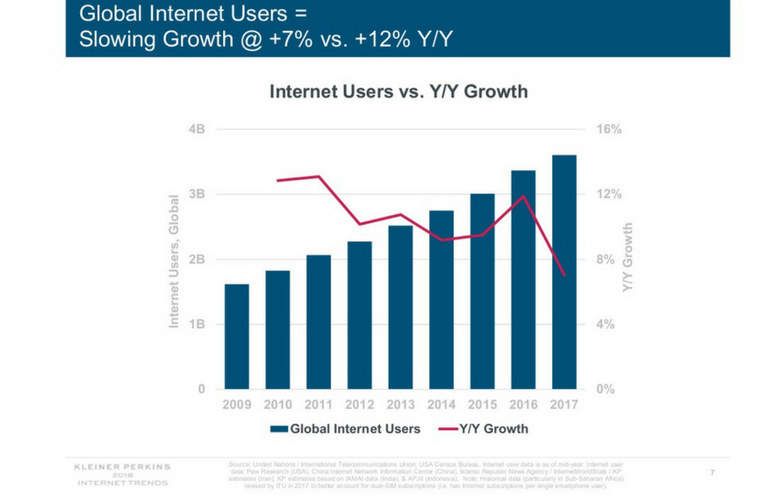 Despite the fact that the number of overall internet users is continuing to grow, year on year growth is on its way down, with virtually no growth at all when it comes to smartphone shipments. Still, overall internet penetration has doubled from 24% in 2009 to 49% in 2017, passing the 50% mark this year. But now that we've hit that halfway mark, it's going to be much harder for the growth to continue.

The good news, for digital companies at least, is that the average American adult is spending more hours on digital media than ever before. Desktop/laptop use has stayed fairly steady since 2012 at just over two hours per day, but mobile usage has doubled from 1.6 hours to 3.3 hours at the same time.

While all of this is happening, devices are getting faster and cheaper, while the number of global WiFi networks has increased by ten times in as many years. It's getting simpler and easier to carry out messaging, e-Commerce and more, and that means that emerging markets will continue to adopt a mobile-first approach to everything from making payments to staying in touch with friends and family. 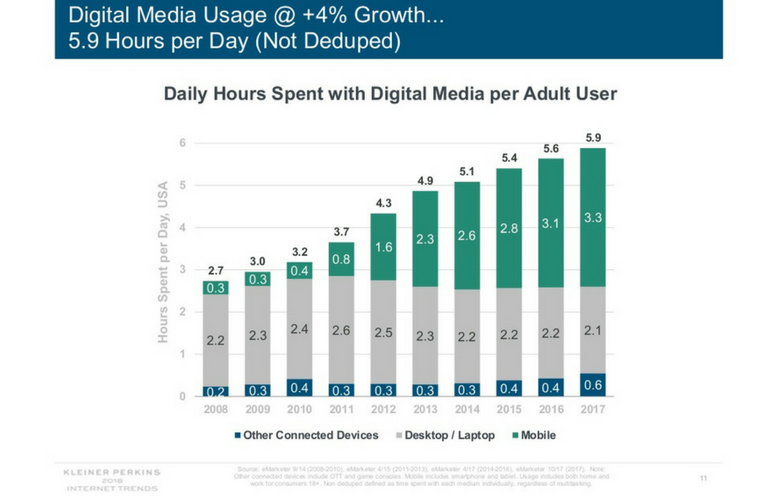 When people were asked to categorize their last ten everyday transactions, only 40% of them were made in-store while 60% took place online. Mobile payments in particular are taking off, especially across China where over 500 million people are already using mobile devices to move money. This switch to digital has also been accompanied by cryptocurrency growth including an almost 4x increase in the number of Coinbase users.

Meanwhile, the amount of time that global users spend consuming video on mobile devices is set to increase from around five minutes per day in 2012 to over half an hour per day in 2018 and beyond.

As more and more people adopt a mobile-first approach to searching, it's also not surprising that voice search is continuing to grow in popularity. The accuracy of Google's voice recognition software and the number of available Amazon Echo skills have continued to increase at an almost alarming rate, and we shouldn't be surprised when the trend continues in the months and years to come. 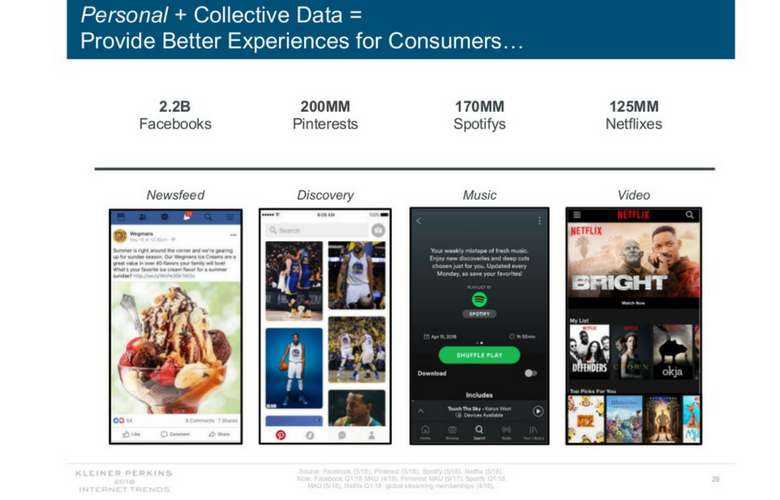 One of the major trends over the last few years is the ongoing move towards more personalized content and marketing materials. As users provide more and more data, Internet companies are in the perfect place to take advantage of that, but they'll have to do this in an era of increased regulation.

For technology companies – and companies in general – there's a real need to balance innovation with the need to store users' data. Consumers don't mind brands having access to their data, as long as they're not misusing it. And if there's one thing that services like Netflix and Spotify have taught us, it's that people are willing to trade access to their data for a more personalized service and better recommendations. 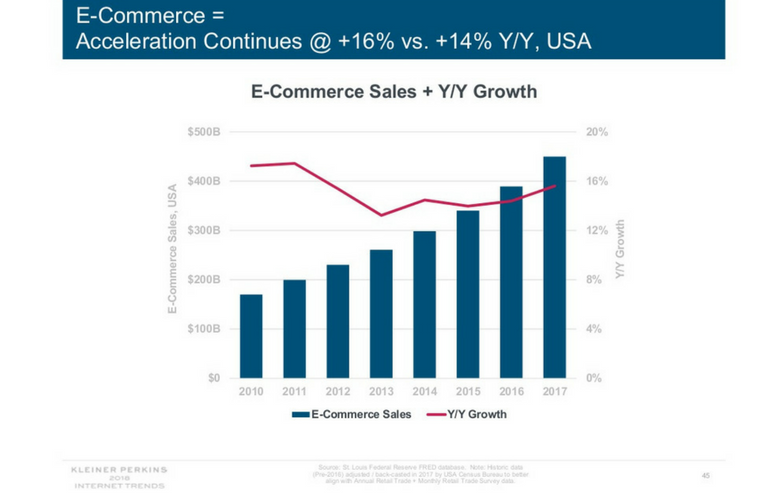 Perhaps unsurprisingly, e-Commerce is still on the rise in 2018 and beyond, with retail e-Commerce accounting for 13% of all retail sales. It's also worth noting that Amazon's ongoing dominance is set to continue with a full 49% of people beginning their product search on Amazon as opposed to a search engine (36%).

Social networking sites are increasingly being used for product discovery, even if only 11% of people buy those products online immediately. A further 44% discover products through social networks and then buy them online from some other retailer, and Facebook (78%), Instagram (59%) and Pinterest (59%) lead the way when it comes to which sites American 18-34-year-olds are using to discover those products.

But it's not just physical products that are changing hands online. You just have to look at the growth of subscription-based services like Netflix (+25% year on year growth) and Spotify (+48%). Meanwhile, Chinese giants like Alibaba are building ecosystems of their own in much the same way that Google and Facebook are buying up as many relevant companies as they can. 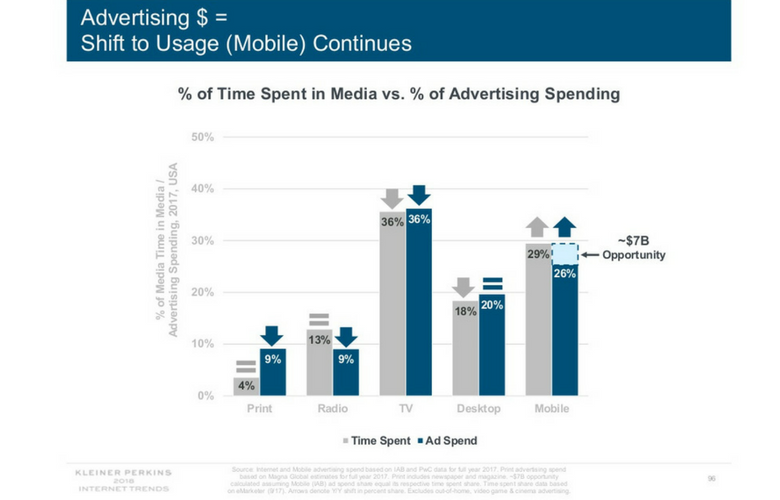 The future of digital advertising is uncertain, due in part to the prevalence of “fake news” and brand safety concerns. Many digital advertisers are afraid or unwilling to run ads over user-generated content because of a perceived lack of control over where it might appear. Because of this, while Internet ad spend is still on the rise, its year-on-year growth has levelled out and the vast majority of new funding is being poured into mobile ads, as opposed to desktop.

The good news is that technology has other benefits, and the rise of comprehensive new cloud-based systems and complex AI and machine learning algorithms means that companies are able to be “smarter” than ever. For example, Walmart has been able to use Internet-based technology to reduce inventory, expenses, and shrinkage, which also means that they can operate at more of a profit – and that they can pass savings on to their customers as a result of it. 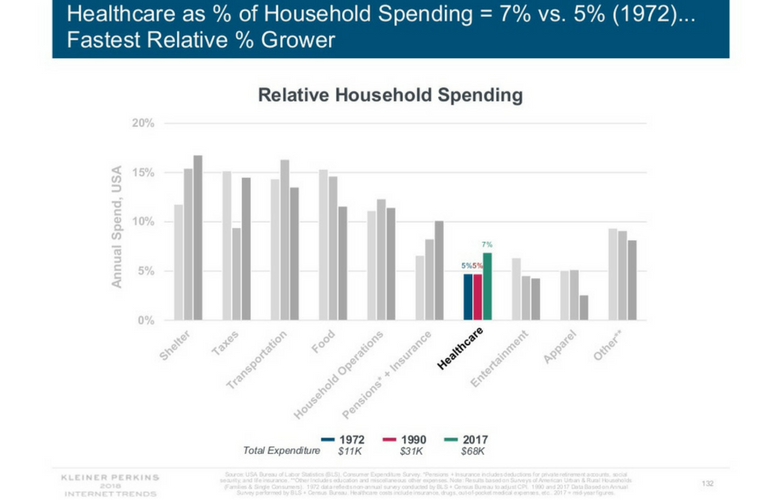 But big companies like Walmart are facing increasing competition from consumer-led alternatives, especially when it comes to the service industry. For example, over 70 million people stayed at an Airbnb in 2016, while Uber has gone from strength to strength hitting over $35 billion in gross bookings and 3 million global driver partners in 2017.

Healthcare is another example of a formerly traditional industry which has been dramatically affected by the proliferation of the Internet. Historically, healthcare hasn't been the type of industry in which consumers have been empowered to shop around, but the Internet has changed all of that and for the first time ever, healthcare consumers now have options. They can research information themselves and even play an active part in their own healthcare by using wearable devices like Apple Watch or Fitbit.

This shift is driven in part by the fact that technology continues to come down in price over time. For example, storage devices get cheaper and cheaper, and so does Internet bandwidth. Information, which used to be analogue and stored in disparate systems, can now be digitized and stored online without a problem, opening up the potential for decentralized systems such as blockchain to integrate this data and to allow us to draw new insights.

And of course, social networking is continuing to allow people to search for peer-to-peer suggestions, advice and recommendations. In fact, social networking adoption is growing in tandem with the growth of the Internet, and so as more and more people in developing nations connect to the net for the first time, we can expect them to sign up for social networking sites and to continue to participate in the sharing economy.

As you can tell from this article, the only real certainty is uncertainty when it comes to the Internet and the way that we use it. And perhaps that's unsurprising. After all, we have access to more information than ever before and the pace of technological development gets faster and faster over time like a snowball gathering momentum as it rolls down a hill.

In the meantime, all we can do is try our best to stay on top of it while keeping an eye on the latest trends and trying to identify the direction in which we're moving. We hope that the trends in this article have helped you to get a good idea of what's happening out there and that now you can spend some attention looking towards the future instead of just scrabbling to deal with the present.