If you're using Google Maps as part of your web presence, whether that's by embedding maps on your website or by building them into mobile applications, then you're probably already aware that, like Bob Dylan said, the times they are a-changing.

That's because Google has recently announced the launch of its new Google Maps Platform, which “introduces changes to their products, pricing, and support to provide…greater flexibility, transparency, and control.” These changes will affect every individual and every company which is using Google Maps and its API to power functionality on their websites. That is why it's so important to wrap your head around the changes and to understand what they mean for your business.

With that in mind, we've created this guide where we'll take you through all the major changes. We'll explain what they mean to your businesses and what you can do to minimize the negative impact of Google Maps integrations on your website. Just make sure that you don't do nothing!

Google Maps Platform: What are the changes?

The changes to Google Maps kicked in on June 11th, 2018 and require users to create a valid API key for each of their web projects that use Google Maps to display data. You'll also need to enable billing with a credit card in much the same way that you need to add your credit card details before you start running Google AdWords. Google says that by doing this, you'll also be able to scale up and down more easily with less downtime and fewer performance issues on your website.

These new requirements mean that Google has stopped offering support for any requests that don't include an API key. Now that these changes have taken place, calls to the Maps JavaScript API and Street View API return only poor quality maps with a watermark. Invalid requests to the Maps Static API, Directions API, Distance Matrix API, Geocoding API, Geolocation API, Places API, Roads API, and Time Zone API will all return an error.

For website owners, this means they'll need to either redevelop their sites to use a rival service or create a billing account for Google Maps and an accompanying API key. They'll also need to update the individual widgets on their website to ensure that they're making all requests using their new API key.

Of course, all of these changes mean that not everyone is happy. Web developers are having to call their clients up to ask for credit card details, companies are having to redesign their sites at the drop of a hat and Google itself is facing a backlash in the comments section of its blog. One user complained that “you can't just take a service that's been free for years and then start charging for it once everyone has committed to using it”.

The problem for Google is that 41% of internet users from across the globe use Google Maps, which means that making any type of change to the platform is automatically controversial. But with so many queries being made through Google Maps and no real way for the company to monetize it in the same way that they monetize their search results, the company was forced to provide more and more resources for free. Until now, at least.

These changes aren't all bad, though. For example, Google has simplified eighteen different APIs into just three products: Maps, Routes, and Places. This will make it simpler for developers in the long run and also allow them to better structure their data and to ensure interoperability. These updates are deliberately designed to work immediately with no change required on the part of developers. Better still, some users will set aside from this issue.

Not all Google users will be affected

The new updates to the Google Maps API are designed with larger companies in mind, and users will be given access to $200 of free resources each month for Maps, Routes and Places. This will be enough for smaller sites and local businesses but will quickly be eaten up by larger companies who make more API requests through Google's services.

These resources will only be provided after billing has been enabled and a valid payment method has been approved. It's reminiscent of how Dropbox works in that a certain amount of resources will be provided for free and that you'll only be charged if you go over them. If you're hoping to rely on just the free resources, then you'll need to consider how close you are to the resource limits. If you run out, then you'll be charged automatically.

The truth is that everyone who uses the Maps API will be affected by the changes because they'll need to generate an API key and enter their billing details. It's just that not everyone will have to pay. It all hinges on how many resources you're consuming.

Price change as a part of the major update

By now, you're probably wondering what the new pricing structure looks like. The good news is that there's plenty of resource usage allowed for free and that after this resource limit is reached, it switches over to your $200 of free resources. You'll only be charged if and when you exceed both sets of resources.

Let's take a look at what you can expect to pay. 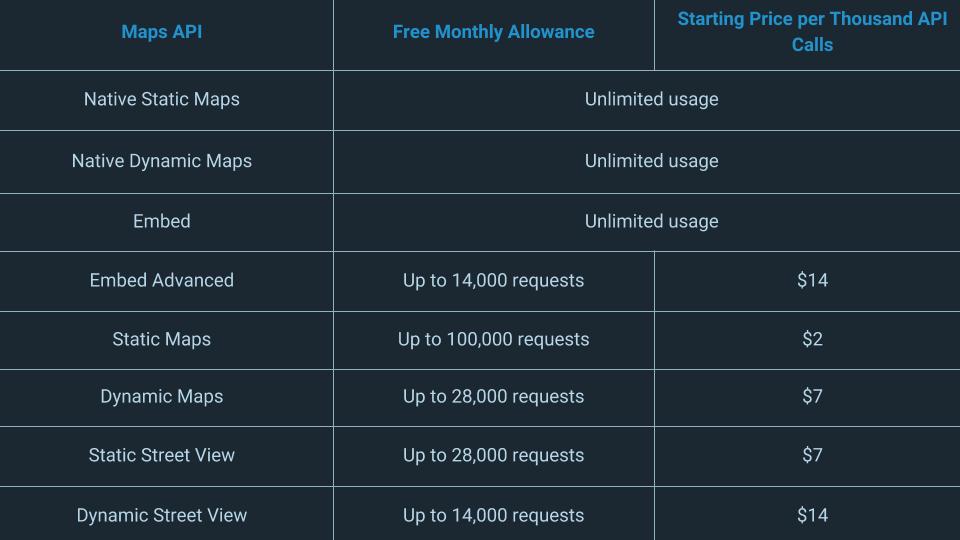 How to make the transition to a paid plan

One of the good things about transitioning to a paid plan is the fact that you don't have to worry about making a choice. Just because there's nothing to choose from. All users will be held to the same pricing plan which includes the first $200 of monthly resource usage for free. The goal was to bring access to all of Google's APIs under a single, easy-to-understand umbrella.

When announcing the release, Google said, “We estimate that most of you will have monthly usage that will keep you within this free tier.” Users are able to cancel their contracts at any time with no additional fees and free customer support for all accounts, regardless of their size.

The good news is that Google has created a transition tool to help people make sure that they're in full compliance, guiding them through the process of adding billing to existing projects, securing keys and getting to know the new Google Maps Platform Console. This post is designed to give you all the information that you need to know. Google's tool is designed to help you actually get started.

These changes to the Google Maps API might be bad news in the short-term as webmasters rush to bring their sites in-line with the changes, but they're better for everyone in the long run. That's because for Google to continue developing the product and providing it as a free service to its users, they need to find new ways to monetize it.

Ultimately, the way that the new pricing structure works is based upon resource usage, and this should mean that the only companies who need to pay will be the ones who can afford it. It's also important to remember that using the Google Maps API can help you bring in more customers, particularly on a local level, which makes it a no-brainer for small businesses who rely on it to build sales. Even if you have to pay more for the privilege, it's going to pay for itself and deliver ROI.

Google has even said that 98% of its customers will be covered by the free resource allowances, and they also note that nonprofits, startups, crisis response teams and news organizations won't be affected by the changes. Regardless of what some naysayers claim, Google isn't doing this to screw its corporate users over. It's just trying to create a fair, sustainable system that will continue to work with everyone – including brands, regular users and Google themselves – for the years to come.