Artificial Intelligence vs. Machine Learning. What is AI/ML in simple words?

You've probably heard of artificial intelligence and machine learning if you've spent some time online over the last few years. The thing to remember is that they're not just buzzwords but rather that they're exciting new technologies that are set to revolutionize the world in which we live.

In today's article, we'll take a closer look at artificial intelligence and machine learning, but before we do that, let's define a few key terms and how they interact.

Artificial Intelligence: Artificial intelligence is the process of giving computer algorithms the ability to "think" like human beings.

Machine Learning: Often powered by artificial intelligence but distinctly separate from it, machine learning is when algorithms parse data in an attempt to "teach" themselves about it.

Deep Learning: Deep learning is the next step from machine learning, using multiple layers of processing to analyze data in a much closer imitation of how the human brain works.

Neural Networks: Neural networks are a subset of artificial intelligence that imitate human brains by using a large number of individual nodes to solve problems by applying each node to the task and then weighting the responses.

Computer Vision: Computer vision allows machines to process visual data such as video or images to understand what's being shown there.

Natural Language Processing: If computer vision allows machines to "see," natural language processing (or NLP) will enable it to read.

NLP also allows machines to understand verbal commands and reply with speech, such as virtual assistants on phones and smart speakers.

So, let's take a closer look at AI in general.

What is Artificial Intelligence (AI)?

Artificial intelligence is a branch of computing in which developers use algorithms to mimic how the human brain works. This encompasses everything from "reading" text and "seeing" images to understanding human speech and making decisions.

It does this by combining computer algorithms with large datasets to allow computers to solve problems. Artificial intelligence is the basis on which all of the other technologies we're talking about are built.

To gain a better understanding of how artificial intelligence works, it can help to take at four of the key trends that underscore the technology: reactive machines, limited memory, theory of mind, and self-awareness. Here's what you need to know. 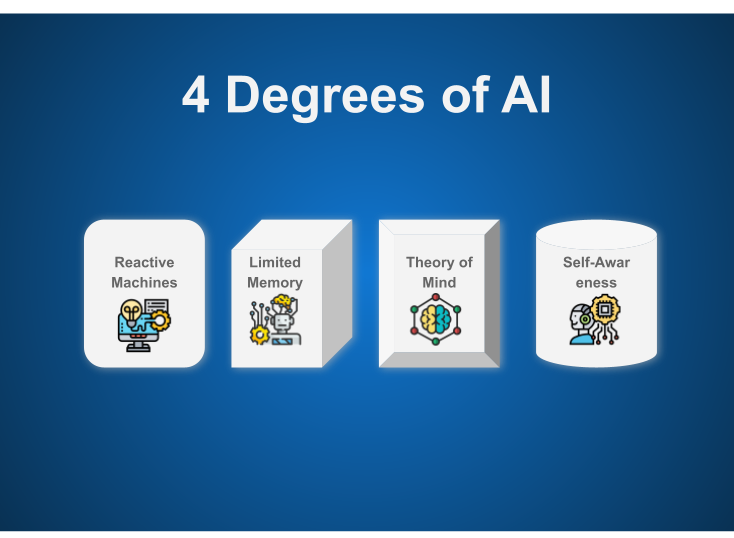 Reactive machines are the simplest form of AI in which algorithms react to the data they're provided, often in real-time. They typically observe the environment in which they're and carry out a set of pre-determined tasks, such as automatically creating financial news based on changes in stock prices.

Limited memory is the process by which machine learning software gains knowledge by processing stored information or data.

While reactive machines deal only with the present and the limited future, limited memory algorithms can understand the past and draw information from it.

The technology underscores a range of different technologies, including virtual assistants, chatbots, and self-driving vehicles. Indeed, self-driving cars work by analyzing what human drivers have done in the past and determining how they'd react to any given situation.

Self-awareness has long been held up as the holy grail of artificial intelligence, and even though AI has come a long way over the last ten years, it's still a long way off this critical milestone.

What is Machine Learning (ML)?

Machine learning is a subset of artificial intelligence which aims to give computers the ability to "learn." This is done by giving them access to a data set and leaving the algorithm to arrive at its own conclusions. There are three main types of machine learning – supervised, unsupervised, and reinforcement learning – which we'll take a closer look at shortly.

One of the most important aspects of machine learning is that it gets better over time as it's given access to more and more data. A simple example of a machine learning algorithm is one that's given photos of cats and dogs and instructed to sort them into sets. Eventually, the algorithm will "learn" the differences between the two animals. Machine learning also powers most social networking sites' news feeds and algorithms on content platforms like Netflix. 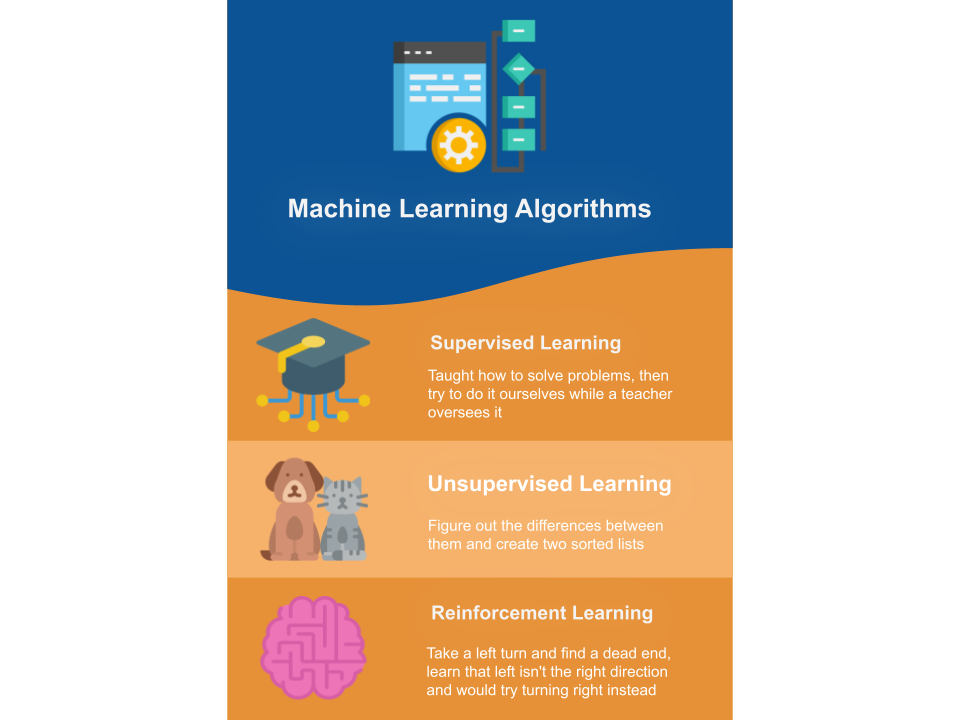 Supervised learning is basically the same kind of learning that we're used to as humans. At school, for example, we're taught how to solve problems, then try to do it ourselves while a teacher oversees us and provides us with guidance along the way.

With supervised learning, algorithms are usually given datasets to process, where they're also provided with the correct solutions. The algorithm can then teach itself the journey from the raw data to the result, like plotting a route map from one destination to another. So, for example, an algorithm might be given a bunch of photos of cups and then left to draw its own conclusions about what makes something a cup.

Unsupervised learning uses the same approach as supervised learning except that the data sets aren't labeled with the desired answers. This leaves the algorithm to draw its own conclusions. For example, to build on the above example, it might be given photos of cats and dogs and then left to figure out the differences between them and create two sorted lists.

People who create unsupervised learning algorithms often don't have a specific goal. Instead, they'll provide the dataset and leave the computer to develop its own conclusions.

Reinforcement learning is a type of learning that occurs when an algorithm reacts to an environment and "learns" based on how those interactions occur. For example, think of an AI being tasked with navigating a maze. It might take a left turn and find a dead end, in which case it would learn that left isn't the right direction and would try turning right instead.

Common examples of reinforcement learning include self-driving cars, automated vacuum cleaners, smart elevators, and more. In many ways, it's like how children learn, especially when it comes to walking and talking (because learning to read is more like supervised learning).

What is Deep Learning (DL)?

What is a Neural Network?

A neural network is a type of artificial intelligence network made up of individual nodes and aims to simulate how the human brain works. The underlying technology for deep learning attempts to use computing power to model how the human nervous system functions. It solves problems by applying each node to the task and weighing their responses to make decisions.

What is Natural Language Processing (NLP)?

Natural language processing (NLP) is the subsection of artificial intelligence that aims to allow computers and algorithms to understand written and spoken words. It's an exciting field that combines computer science with linguistics and etymology, and it's increasingly essential throughout our society.

NLP allows algorithms to read the text on images, scan books and understand what we're saying to virtual assistants and smart speakers. Its end goal is to be the technology that sits between computers and machines, allowing us to communicate more naturally.

What is Computer Vision?

Computer vision uses computing power to process images, videos, and other visual assets so that the computer can "see" what they contain. A classic example of this is screen reading software for the blind, which attempts to gain an understanding of what's being shown on-screen. It's been said that if AI allows computers to "think," computer vision will enable them to "see."

Which Industries Use AI and Machine Learning Today?

This question is interesting because it's easier to ask which industries don't use AI and machine learning. The challenge is made even more difficult because the technologies typically sit under the hood of software applications, so we don't necessarily get to see them. With that said, here are a few of the industries that use AI and machine learning the most prolifically.

The manufacturing industry uses AI and machine learning for a variety of different use cases, from verifying that employees are using the correct safety gear to ensuring that proper procedures are followed.

AI and machine learning also typically power analysis software and provide insights into different ways that the manufacturing process can be streamlined and made more efficient.

Social media sites typically use AI and machine learning to power their newsfeed algorithms to ensure that users see content tailored to them and most likely to keep them on site.

AI and machine learning are both playing increasing roles both in content creation and content consumption. These algorithms determine what we see for consumption, such as in the recommendations engines on Netflix and other streaming sites. For content creation, AI-powered tools increasingly create written words, images, music, and video. For example, AI can automatically generate royalty-free music to be used in the background of YouTube videos.

One of the most exciting things about artificial intelligence and machine learning is that they can be used to power personalization, and that's urgently needed in the healthcare industry. Imagine a Netflix of healthcare where doctors are given treatment suggestions based on what's worked well for other, similar patients. AI also powers healthcare assistants and other tools that can be used to improve outcomes for patients.

AI and machine learning are hugely prevalent in the financial services industry. It's used to look out for fraudulent transactions so that providers can put a stop to the transactions as quickly as possible. It's also used to make investments, especially via dedicated software that makes predictions about stocks and flips them by buying low and selling high. Machine learning also ensures that the more the algorithm is used, the better it gets at it.

The most obvious use of AI and machine learning in the gaming industry is to power non-player characters to make them as realistic as possible. It's also often used for advanced modeling and simulation to make games more realistic, and it can be used to automatically generate randomized landscapes, loot drops, and all sorts of other goodies that are essential for realistic gameplay.

Want to Implement AI/ML in Your Organization?

If so, you've come to the right place. Here at Zfort Group, we work with emerging technologies like artificial intelligence and machine learning solutions. We have a proven track record of delivering major projects on time, on brief, and budget.

So whether you're ready to implement AI and/or machine learning or just looking to learn a little more, we can help. So get in touch with us today to find out more!

What's the Difference Between AI/ML?

Are AI and ML the Same?

AI and machine learning are sister technologies, which means that the two of them often go together but are not the same and that you can have one without the other. In most cases, though, AI is used to power machine learning algorithms.

This is like comparing apples to oranges. Both technologies have their place, and the more important thing is to figure out which one is right for your specific use case. Both are equally powerful and promising, so it's impossible to say that one is better than the other.